2018 Line-up will be announced later this spring!

Chipko Jones – http://chipkojones.com/
Chipko Jones is a Calypso/Roots/Reggae band based in the beautiful Okanagan region in BC, Canada. The project was formed in 2014 and includes members Anessa Lang and Darius Stone/Sax, Moot Murphy/Vox and guitar, Jen Millan and Jacob Soucy/Trumpet, Jacob Chatterton and Tim Osborne/Bass, Wendy Aronyk/Flute, Waseem Hakhroo and Chris Galardo/Drums and Bruce Collis on Conga and percussion. All the members met through the thriving music scene in the band’s hometown of Vernon BC.

Kym Gouchie Band – https://kymgouchie.com
Singer/Songwriter Kym Gouchie is from the Lheidli T’enneh Nation in Prince George, BC. Canada. A self taught guitar player and a traditional hand drummer, she utilizes her eclectic background to inspire her as she combines elements of traditional, folk and country to create a unique voice. Raised among musicians, it wasn’t until dealing with personal tragedy that she was able to find her voice on her own journey, which is realized with her debut album.

Los Riveras
Led by Juan Clemente, the four piece local band Los Riveras plays music from traditions of Latin, Spanish Flamenco, Romani, and Gypsy. The band will have flamenco dancers with them. Get ready to dance with them!

Krystal Withakay
Krystal is a First Nations drummer and performer from the Westbank First Nation. 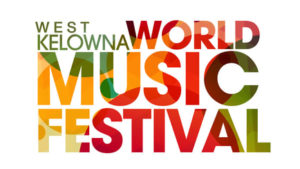 KIDZONE
Picture
The Interior Savings KidZone is back in 2017. Interactive music and culture sessions will be taking place between 4 -8 pm on Saturday, Aug. 26, for kids, caregivers, and even the young at heart!